Beautiful formations in the soft shale rock and the crystal clear water makes Ruttjebäcken a favorite destination in this area.

The excellent footpath begins on the other side of the bridge across the Ruttjebäcken brook. After a few hundred metres you can leave the footpath and go out on the rocks. Stroll about here and look for giant pot-holes, tunnels, channels and fanciful weatherings of the soft slate rocks. The less water there is in the brook, the more beautiful formations emerge.

The Ruttjebäcken brook has been digging itself down into the soft slate rocks for thousands of years. There are also veins of limestone in the bedrock. When the slope begins to level out the formations in the brook diminish. The footpath then also deteriorates and becomes wet.

Length: It´s up to you!
Elevation change: 100 m to the tree line
Level of difficulty: Green (5 km/hour, very smooth, and level path) 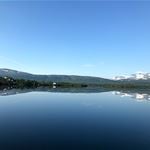 Distance: 15.1 km
Hemavan is what mountain life is all about. A smaller village near Vindelfjällens nature reserve, it has a vibrant cultural landscape, with an active settler and Sami life where the reindeer business still has a prominent role.
Book