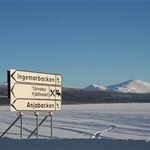 Distance: 14.8 km
Hemavan is what mountain life is all about. A smaller village near Vindelfjällens nature reserve, it has a vibrant cultural landscape, with an active settler and Sami life where the reindeer business still has a prominent role.
Book
Build: 23/10/2020 15:51:24, Host: online3core18, DB: o3.cbguide-7541.cbischannel-20898.v1 online3data04.db.citybreak.com:8080, Controller: Todo, Action: showdetails