This is the name given to a form of ancient remains in the mountain regions which have not yet been fully explained.

It was Ernst Manker who coined the name “Stalotomter” in the 1950s to fit in with his theory that this type of ancient remains comes down to us from the Stalo people in the Sami sagas. However, there is nothing today which supports Manker’s theory of the Stalo grounds. They are probably the remains of temporary huts used when hunting wild reindeer. Stalo grounds are usually sited in groups of 3-7 high up in the topmost mountain forest. Every ground is oblong or oval, up to 6 metres long and 5 metres wide. The floor surface is dug down about 10 centimetres and surrounded by a low embankment. There is usually a hearth in the middle of the floor. The dating of the grounds falls within the period from 500 AD to the sixteenth century. Some metres to the south of the grounds there are two small hollows resembling milk-storage cellars, and to the north of the grounds a larger cellar is hollowed out. To the west, next to the brook, there is a hearth which is believed to originate from a Sami tent hut. 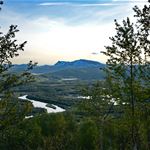 Distance: 26.2 km
Hemavan Fjällstation, former SMU Fjällgård, is a drug free alternative for individual guests, families and groups. The facility offers a relaxed environment and several rooms were you can spend time together.
Book 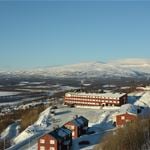